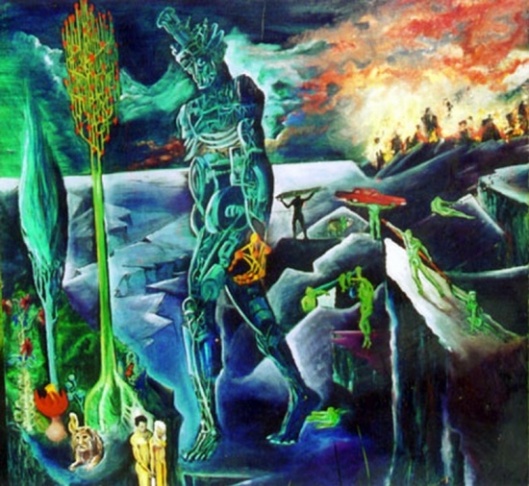 s. believed in nothing but himself. he thought that all forms of government were oppressive.
he was open-minded though. he might consider greek democracy of city states with forums open to any citizen. he would even consider god if he had any sign of him.

in his fifteen year old mind all religions were invented by old men who hated noise. they craved quiet and a peaceful grave. and so they told stories to bend young minds to live organized lives of placid uniformity. they couldn’t prove the goodness of being good so they made promises about the life after this life where music was in the air and the people were light and beautiful.

he fantasized a new utopia of honor and truth. a land of milk and honey; a place of happiness for everyone where people were free to live and love in the luxury of peace and prosperity. in s’s utopia there would be no crime. and s. considered war to be a crime.

s. was impressed by the diamond tiaras and pearls, the rubies and emeralds as big as teaspoons, the mink stoles and tuxedos. the gallery was lit as bright as day. you could hardly see anderson’s masterpieces the gallery was so crowded; full of millionaires.
the paintings, all handsome in baroque gilt frames with engraved copper titles and dates dressed the three long walls ; all were anderson’s paintings except the short wall which exhibited the passable works of his students. 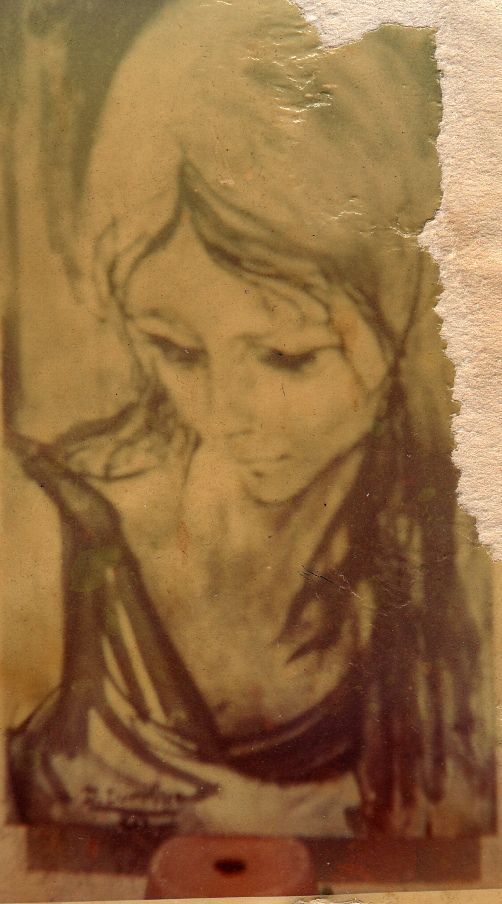 s. was represented by a five foot opus he called ‘protest’ sometimes, and ‘progress’ other times. of gallery 14. on worth avenue, ‘luxury street usa’, where the main drag was nothing but jewelry stores, high class galleries and restaurants.

s’s allegory, the city exploding, people clambering over uplifing earth carrying possessions they most identified with, children carry a white flag, a chauvanist helps his chained wife over an incline. and the strong man carrying on his back his red mustang.
and on one side, the way the world could be; the garden of eden where even children were safe from lions. (that was before his stepmother had painted out the two figures copulating in the jungle.) maybe it was the lucky proximity of the table of hors d’houevres and canape’s of beluga caviar and other relishes that kept a crowd of connoisseurs gazing and commenting on this one painting which stood out like a sore thumb amidst the chrysanthemums, and sweet portraits of the other students.

this was west palm beach with more millionaires per capita than any other city. of course they said that about winter park too which was home to anheuser busch, fourth generation beer magnate, the paper clip family and some chrysler created fortunes.

all s’s hopes and fears were summed up in that one drunken night. nauseated by the stroking of his budding ego and appalled by his innermost thoughts and feelings, imprinted permanently in his lexicon of vices, this gaudy crowd of the nouveau riche and their decadent behavior attracted his lowest desires. to be pampered, even adopted by the filthy rich who wore their seductive inclinations on their sleeves, both the ‘GQ’ men and the glamorous women and the horror of being treated as a thing, a prodigy, an object of personal desire, struck him as the ultimate prostitution.

s. had a little place by a lake in the slash pine forest north of winter park. his stepmother had once lived there. it was built by her first husband and their two boys and never finished. one big room with a picture window, a fireplace, a front door and a back door. outside a simple masonry tower with a shower and a refrigerator rose out of the rock garden and it had a spigot. that was where he washed his dishes. it made a good studio and s. isolated after the big show. he couldn’t swim in the lake because of the one alligator he had seen, but he could shower in complete privacy and sunbathe. he slung a jungle hammock in the tower and often read there for hours and fell into a dreamy nap. often these naps contained the images he would paint.

painting through the night sometimes and not stopping to eat even, he became skinny and a little depraved. after seven days of no phone or television or human contact he would ride his bike back to the lake howell house. once, when he spoke for the first time, the words came out all garbled; his mouth had forgotten how to form words.

reading and painting and living on red wine and cheddar cheese sandwiches on rye bread with a slice of onion, s. may have felt lonely at times but continued his hermitage existence until the first sidewalk arts festival in winter park.

people who knew credited s. for initiating the festival with the collaboration of robert l. anderson, bill orr, his stepmother anita who was now active in community affairs, and a few other artists in anderson’s ‘salon’.